Bicycle Safety a Must for Lowering Risk of Traumatic Brain Injury 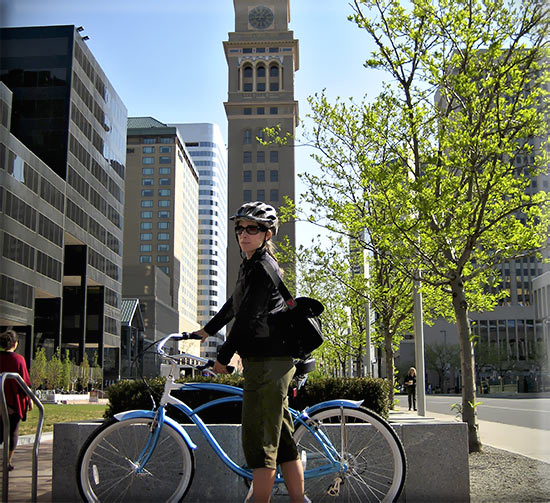 · Bicycling keeps people healthy. Cycling just three hours a week can cut our risk of heart disease and stroke by in half.

· Bicycling for routine trips can be enough to improve fitness.

· In just one generation, the number of children who walk or bike to school has dropped 75 percent and the number of overweight children has tripled.

· Most of us have been riding bicycles since we were 5 or 6 years old. There's no driver's license required, and many times, no one is enforcing state and local laws and ordinances.

But did you know this?

A helmet can prevent 85 percent of brain injuries.

At Mary Free Bed we see the outcomes of bicycle riders and motorists who are not aware of, or do not obey, the state laws or city ordinances. Often by bicyclists just fail to use common sense when cycling.

Children under 10 should ride on bike paths or sidewalks. Teach your children that motorists, especially those backing out of driveways, may not see them. Also, teach them to yield the right of way on designated bike paths. Faster moving pedestrians should yield to slower moving pedestrians. Bikes, for example, yield to runners and runners yield to walkers.

If you don't know the laws in your area, make a point to learn them prior to hopping on your bike. As a motorist, you should familiarize yourself with these laws and ordinances, as well. Also know you could be ticketed for failure to yield to a cyclist. For more information, see additional resources at the end of this article.

Below are some recommended safety tips and the laws and ordinances for increasing bicycle safety.

· The same laws that apply to motorists apply to cyclists. Cyclists can be ticketed and fined

· Use hand signals to indicate stops and turns

· Wear a helmet, no matter how short the trip. This is not a law in Michigan but is highly encouraged, given the statistic that a helmet can prevent 85 percent of all injuries to the head

Ride on the Right:

· Always ride in the same direction as traffic. In Michigan, this is the law

· Use the furthest right lane that heads to your destination, unless there is debris, potholes, dead animals, or other items which would make doing so unsafe

· Slower moving cyclists and motorists stay to the right ; always pass on the left and give a verbal warning when doing so

· Ride in a straight line

· Don't swerve in the road or between parked cars

· Check for traffic before entering street or intersection

· Use a white front light in low light conditions. See Michigan law below:

Bicycles being operated on a roadway between

equipped with a lamp on the front which shall emit a

be visible from all distances from 100 feet to 600 feet

head lamps on a motor vehicle. A lamp emitting a red light

in addition to the red reflector.

· Use a red rear light in low light conditions

· Use a reflector or reflective tape or clothing anytime

· Stay observant at all times of other roadway users

· Don't talk on your cell phone

· Never ride more than two abreast. In Michigan, this is the law

· Wear identification, which also lists allergies, emergency contact information and all other pertinent information. Call or e-mail to receive a FREE identification tag: Stephanie.Millis@MaryFreeBed.com or 616.242.0305.

· Ride a bicycle that's properly fitted to the rider

· Never carry a passenger on the handlebars, in a basket, on the tires, or anywhere other than an approved transporter

· Never carry or transport large items on your handlebars, which could obstruct your view

· The same laws that apply to motorists apply to cyclists

· Recognize hazards cyclists may face and give them space

· Don't drive distracted - No texting! In Michigan, this is the law!

· Cyclists should be given the appropriate right of way

· Scan for cyclists in traffic and at intersections

· Do not blast your horn in close proximity to cyclists

· Look for cyclists when opening doors

· When passing, leave four feet between you and a cyclist

· Wait for safe road and traffic conditions before you pass

· Bicyclists do have the right of way, and in some states, cities, and counties it's the law to ride on the road. Do not expect them to be on the sidewalk

· Treat cyclists the same as you would another automobile - pass only when safe to do so. If it is unsafe to pass a cyclist, slow down and wait until it is safe

If you would like more information about bicycling laws and ordinances, in Michigan, go to www.michigan.gov/mdot-biking or www.LMB.org.

**For a FREE Identification tag that you can put on your bike or on your shoes, contact Stephanie Millis at Mary Free Bed at Stephanie.Millis@MaryFreeBed.com, or call 616.824.0305.